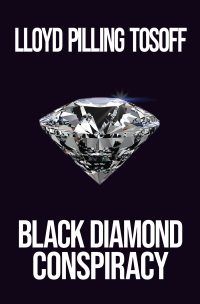 Lloyd Pilling Tosoff’s eighth novel, Black Diamond Conspiracy is a crime fiction thriller about diamond smuggling in the 80s, a time of sexual freedom, drugs, fast cars, fast planes and risk takers like Jason Black, the novel’s main character. After suffering amnesia from a brain injury in the aftermath of a plane crash, Black must try to remember the details of his life as he flees from the mob and a rogue cop.  A gripping plot that will keep the reader turning pages until the surprising conclusion.

Thirty-one-year-old former airline baggage handler, Jason Black miraculously survives the crash of his light aircraft near the town of Canmore in the Canadian Rockies. After a lifesaving surgery and awakening from a coma with no memory of his life before the crash, Black is helped to uncover his past by the young woman who discovered the badly injured pilot as he lay slumped over the controls of his downed plane. The recollection casts a shadow over his second chance at life when he finds out that he was involved in a diamond smuggling ring. Forced into finding diamonds missing from the crash site, he faces the wrath of the mob and pursuit by a rogue cop for a murder he did not commit.