Rise of the Henge 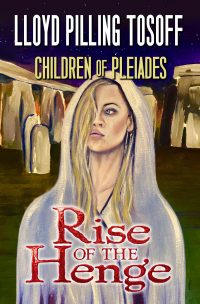 Rise of the Henge

Lloyd Pilling Tosoff’s sixth novel is the first in a two-part series. An ancient, historical human drama unfolds, as four generations of a sacred bloodline are haunted by a murderous act perpetrated by an ancestor, who along with his only son, first settled the Salisbury Plain of Southern England. Children of Pleiades follows the timeless human struggle enfolded by cosmic forces of good and evil that have existed since the beginning of time.

As a star seeded bloodline unfolds on the ancient Salisbury Plain of Southern England, its children are caught up in the timeless struggle between good and evil. Rise of the Henge, the first in the Children of Pleiades series, is a human drama that reflects superstition, folklore, and belief in an Otherworld of pixies, faeries, angels, and legends of visitations from star men.

Horst of Skerrabra risks the lives of his family, crossing the dangerous waters between the northern Isles and what is now the shores of Scotland, to begin a trek across the barren English midlands to find the destiny of a sacred lineage of celestial origin.  The shadow of a murderous act follows four generations of offspring whose fate it is to bring the Great Henge into being under the light of Pleiades, the stars of the Seven Sisters, prominent in the night sky.

“An ancient, cinematic tale with believable characters whose interpersonal passions and conflict could be from any time over the course in history. An accurate portrayal of the unchanged human condition and belief in legend and superstitions brought to life by the author.”
– Gary Dunham

"Making fantasy fiction that appeals to all readers, and especially to the Young Adult audience, is a skill Tosoff has achieved. The eloquence of Tosoff’s prose heightens the pleasure of his story. Beautifully painted and performed."
– Grady Harp