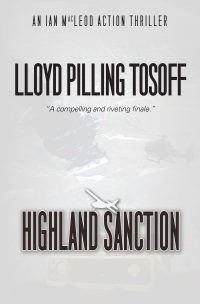 The finale in the Ian MacLeod action series is Lloyd Pilling Tosoff’s third novel. Young, tech savvy mobster Joseph McMurphy is intent on avenging his father’s death with a sanction against MacLeod‘s life. Pursued into the rugged terrain of the Cairngorm Highlands, MacLeod faces the greatest ordeal of his life.

After their secluded croft in the Scottish Highlands is discovered by mobster Joseph McMurphy, MacLeod and Kyla flee in a light aircraft across the frigid waters of the North Atlantic.  The daring escape ends in a crash landing on the shores of Iceland where Ian MacLeod begins yet another chapter in his troubles with the Scottish Mob. The heir to murdered Glasgow mobster Douglas McMurphy’s criminal empire, seeks revenge after seven years in pursuit of the man he holds responsible for his father’s death. Joseph McMurphy is a sex and cocaine addicted sociopath, who has rebranded his father’s crime syndicate to bolster his legitimate image as a CEO. A gangland sanction against MacLeod’s life ultimately ends in the rugged terrain of Scotland’s Cairngorm Highlands where MacLeod faces his greatest ordeal. A compelling and riveting finale.