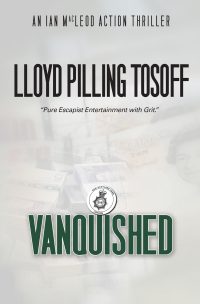 Book two in the Ian MacLeod action series, and Lloyd Pilling Tosoff’s second novel, begins with the former accountant charged with possession of mob money, and he is extradited back to the UK from the Cayman Islands where he and Kyla had fled mob retribution. A conspiracy unfolds as MacLeod searches for the mob’s Highland bunker in an exposé of political intrigue and dirty secrets spanning from the seedy streets of East London to the Home Office itself.

Being in possession of mob money catches up with MacLeod, and he is extradited back to the UK after he and Kyla help Natasha, a young victim of the sex trade, kick her heroin addiction at a healing center on the Cayman Islands. Kyla finds out that Scotland Yard and the Home Office are rife with corruption at the highest levels, and calls upon former spy and lawyer, Nigel Cambridge to help free MacLeod by cutting a deal that takes the trio on a jaunt into the Scottish Highlands. Political intrigue and the sexual secrets of the UK’s most powerful men are interwoven into a complex plot, driven by a conspiracy contrived to set MacLeod up for revenge by mobsters Ascot and McMurphy. An exposé that delves into the sex trade on the seedy streets of East London and offers a glimpse into the life of exotic call girl, Justine Prothumo, reverberates all the way up to the Home Office. Pure escapist entertainment with grit.

“Vanquished starts where Point of Return leaves off and it is a thriller too. Lots of unexpected surprises and turns in the story. As I got close to the end, I started slowing down my reading to make it last longer. I only wished that there were another 200 pages! Both books have a great ending that would be hard to predict.”
– Alan